4 Signs You Have a Bad Manager On Staff 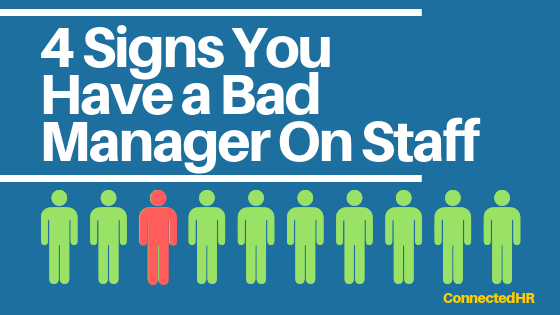 There a lot of political ways to say this, but let’s just say it: some people are not fit to be managers. Everyone can think of a good example of a bad supervisor. This doesn’t mean they’re a bad person, although that could be a factor, it just means that their strengths may lay elsewhere. If you have a story or example of a bad manager you’ve worked for, or who’s worked for you, I’d love to hear it. Throw it in the comments down below.

This is a common HR issue because, as we’ve explored, the attitude and behavior of employees is often a reflection of the quality of their leadership. Connected HR considers it very important to solve these leadership problems before they happen. The first step is to identify them. Here are some things to look for.

1. Your Employees Don’t Trust Your Manager

As president, owner, or just general guy/girl in charge, you have to delegate the leadership tasks of every department. This is necessary to run a mid to large size business, but it creates a degree of separation between you and your employees.

You don’t have a firsthand understanding of the dynamic between managers and their departments, but a big red flag is how those departments act when they have a problem.

For example, if a person’s been sexually harassed in the workplace, they will approach the authority figure that makes them feel safest. What about the manager makes this employee not feel safe to talk about sexual harassment? Maybe the manager just doesn’t make themselves available, doesn’t care, or the worst case scenario.

Employees constantly in your office, looking for your help to deal with problems, means we’re dealing with two different perspectives. You obviously trust this person- you put him/her in charge of part of your company. There’s clearly a difference between the person you hired, and the person these employees work for. Find out what that difference is.

2. Your Employees Are Leaving Let’s say you’ve brought on a new manager within the last year. Things are going well. The numbers are where they need to be. You credit the success of this department with the new manager. As many would.

However, Karen just put in her two weeks. Which sucks, because Andrew just found a new opportunity in a different industry, and Karen was picking up the slack while you looked for a replacement. You’d love to give the work to Brian, but he’ll be gone at the end of the month.

People who have worked for you, produced above and beyond for a long time, are leaving. Not all once, but it seems that the best opportunities, as we love to put them, are no longer within your own company. Why is that?

This is a big red flag, especially when you’re growing a department. If the long-term people start leaving, that’s bad by itself, However, if you start getting workers, good workers, who are lasting less than a year, you need to start asking questions. Those questions need to be directed at the manager.

There’s a great phrase I heard from someone I actually used to work for:

3. The Manager was Promoted For The Wrong Reasons

When looking for good applicants, we need to evaluate them using the criteria for their future role, not the criteria that make them successful in their current one.

The Peter Principle is a term referring to a person who is promoted until they’re at a position they’re unsuited for. A good salesperson may not have the leadership skills to be a good sales manager. However, the better salespeople are more likely to be promoted to manager, as their performance gets them noticed, and we often assume one naturally leads to another.

This is a fallacy, and it can happen in a few different ways.

One common scenario is that there’s a need, and you maybe don’t understand how vital that need is, so you don’t take the time to shop for an able recruit. You just find someone who’s made themselves helpful. We see this all the time, where a person isn’t promoted, their position is. If this position ends up being the head of a department, you’ll often find that this manager’s subordinates are more qualified than their boss. It’s even worse when you don’t notice because you haven’t taken the time to evaluate, or audit, the quality of this person’s work compared to your industry, and you end up with a department that costs a lot of money and is a huge waste of everyone’s time.

Another common situation, one that is especially difficult to extricate yourself from, is the “friend”. You already know what I mean. Don’t hire someone you wouldn’t be willing to fire. Don’t mix business with pleasure blah blah blah. It shouldn’t need to be said but it does in situations where you don’t realize you’ve done it. Having a feeling of trust between you and your team is exactly what we want, but trust instead of honest evaluation is not.

Ultimately, promoting the wrong person happens simply because you looked but couldn’t find the right one. This is ridiculous. There are 260 million people in this country. Look harder.

Now, obviously, if someone’s good at their job, who cares why they were promoted? Evaluating the circumstances of a person’s rise comes after the question of competence has already been raised, and helps prevents future problems, and that’s really the name of the game.

4. Your Manager Doesn’t Keep You Informed

The idea of having someone else manage part of your company implies a level of autonomy you definitely want to maintain. If you can’t bring yourself to leave the operations to this person, you’re just wasting money on their salary.

However, there’s a line between hands-off and not knowing what’s going on.

The success and failures of your company should never come as an absolute surprise, and a good employee will want your input on matters they consider important. Hiring processes, big sales accounts, and issues in the accounting department should be resolved with your input in mind. A manager that doesn’t report to you is blinding and deafening you to the needs of your own company.

Any invested employee will have their own process for involving you because they want you to be involved. Everyone wants their boss to know when they’re killing it. Everyone should want to get out ahead of problems and be seen fixing the leak before it explodes.

When a manager doesn’t do this, it’s deliberate. They require their own subordinates to report to them (RIGHT?), so they understand how things are run. This could be an issue of respect, this person could be mailing it in, they could be hiding something, etc. Don’t jump to conclusions, but know that they know what they’re doing.

This one’s tricky because it goes back to what we said about leadership. If you find a manager is not reliably reporting to you, the first question is for yourself; “Did I cause this?”. If the answer’s yes, reread this article. If not, then find out why they don’t want to celebrate their success with you, or why they don’t want you to know about their failures.

There are many many obvious reasons to reevaluate a manager. Theft is a big one, as well as any outright illegal behavior. Disrespecting coworkers and the workplace is a big one for HR departments that you’ll see. There are tons.

We’re not talking about those because you know about those. Stealing is bad. Don’t be a jerk.

We’re here to help you with your blind spots. HR departments often deal with the uncomfortable “little” problems that employees have, and we see what happens when good employees are mismanaged. These “little” problems, when left to marinate, become big ones. Actively engaging with your employees and understanding how everything is working, is how we prevent issues, and we want you to be as well equipped as possible to run your company.

If you’d like to learn more about what we do, give us a shout. We treat our clients as families but our professional and legal expertise help companies in every industry.