Curbing Inappropriate Conversations in the Workplace 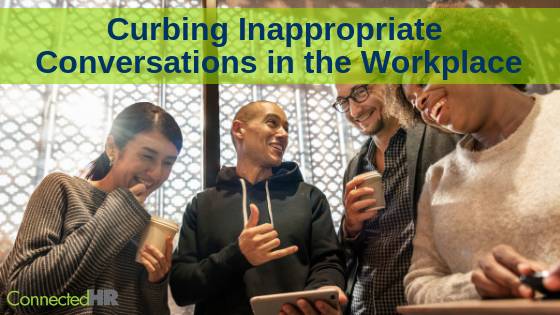 Construction workers get a bad rap: inappropriate work talk is everywhere. Even if you have a “thick skin” and work with people you know personally, someone’s going to get way too comfortable and turn off their filter.

Some things are obvious, but not to everyone.

As an HR services firm, we absolutely know the cost of off-color, unprofessional dialogue. The cost is money. So much money. Though we’ve extensively covered sexual harassment, as well as the HR concerns for companies in 2019, we haven’t provided specific examples of what this dialogue may be, nor given you the words to curb inappropriate behavior before it escalates.

So, we’ll be providing some example scenarios to explain the liability your company may have. These situations are the kind that gets brushed off and not handled and may not feel urgent to everyone. But, when you look at them from a liability perspective, they obviously are.

Example #1: Racial Discrimination in the Workplace

“She doesn’t really believe that it’s just the words she uses”.

“He would never say that in front of them.”

These are the kinds of excuses someone makes for a man or woman who really needs to speak to HR.

Recently, there was a man employed as the Operations Manager of a location at a very customer service-centric company. He was comfortable using certain words I can’t write without using asterisks. All of those statements above were said about him, by employees who genuinely liked the guy.

An employee he managed was not performing to the standard set for workers in that position. This went on long enough that the decision was made to let them go.

The terminated employee claimed discrimination and there was a lawsuit. During that lawsuit, a recording was produced in which the manager used racist dialogue. The manager ended up losing his position. The company settled.

Now, some people who don’t know what entrapment means are saying the manager was tricked and entrapped. Nope. That’s not the problem. This manager has probably exhibited inappropriate racial dialogue in the past so someone knew that if they recorded a conversation, they would probably record something worth holding onto.

Read More: 4 Signs You Have a Bad Manager on Staff

These situations are pretty easy, racial discrimination in the workplace needs to be reported and handled immediately. Blaming behaviors on “old-fashioned mindsets” will not hold up in a discrimination case against your management or company.

Example #2 – Sexual Discrimination in the Workplace

There’s no excuse for pushing overt sexual content into a conversation, while it may be easy for a group of work colleague/friends to slip into jokes not suitable for work, that behavior needs to be immediately addressed.

Believe it or not, some women can be extremely obscene, and some guys don’t want any part in this kind of conversation. That is why it is important to cover training with all of your employees.

A female employee had to be reprimanded by her HR department for using inappropriate imagery in a workplace conversation. There were several contextual factors which some people may use to excuse her, but don’t actually matter. Those were:

It is absolutely possible that the men she works with have made equally unprofessional statements, if not worse, but that does not excuse her behavior.

Read More: Sexual Harassment in the Workplace: Know The Numbers

If you don’t set a bar for people’s behavior, they’ll set it themselves, and it’s usually lower than where you want it to be.

You can’t be your own HR department, or, at least, you can’t do it forever. As your company grows, its needs will grow exponentially. The training, the material, the steps you take to protect your business are too numerous for one person with no support.

Small companies may not have a dedicated HR staff. This means that, when something as obnoxious as statements like these happen, dealing with them is going to be frustrating. You just want to say “this is obvious, you’re an idiot” to your employees, but obvious is subjective. You need the proper training from knowledgeable staff to set that bar that everyone meets. Otherwise, you’ll constantly feel like you’re wasting your time.

If you need advice about resolving conflicts or recognizing bad behavior among your peers, give us a call. We can have a short conversation, answer any questions, and we offer comprehensive consultations, as well as professional HR services. Let us know what you need, and we’ll make it happen.