Marijuana in the Workplace: What Are Your Options? 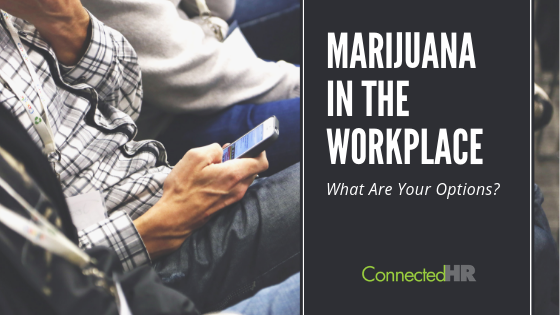 Marijuana and ever-changing marijuana legislation present both a cultural and practical set of problems for employers. ConnectedHR and our partners are meeting with scores of owners about how to handle marijuana in the workplace, and what to prepare for as the law changes. Cannabis is still listed as a Schedule 1 Drug by the United States Drug Enforcement Administration. That is a substance or chemical with no medical use and high potential for abuse. While this is hotly debated by the medical community, as well as several state governments, that is currently what the federal mandate is.

In Ohio, possession of fewer than 100 grams of Marijuana has been decriminalized– it’s treated as a misdemeanor and does not produce a criminal record. There is no jail time and a maximum fine of $150- basically a minor traffic violation.

Ryan Neumeyer, Labor and Employment attorney from McDonald Hopkins, works with ConnectedHR to train companies on topical and sensitive practices. He recently spoke about Medical Marijuana and other contemporary workplace issues.

“When state law deviates from federal, employers have a choice. There are some states which require state law to take precedence over federal but Ohio (is not one of them).

“So, company policy in Ohio is at the employer’s discretion.”

Rarely do companies get to choose which laws to follow. However, the disparity between state and federal law right now means companies in Ohio have a few options. Ryan helped us to explore what those options are.

Zero Tolerance means no use whatsoever. An employee who tests positive for marijuana, or who is otherwise found to be using it, will be terminated.

“More and more companies are reaching out to us and 99% of those companies have a zero tolerance policy, which is (supported) by federal law.”

The majority of companies having that zero-tolerance policy could mean a few things. However, most of these boil down to keeping the status quo and ensuring safety. Having to draft new rules, deal with cultural predispositions and keep track of a new set of laws is a lot of trouble you don’t necessarily need. A zero tolerance policy covers all your bases and keeps you in line with the DEA’s official position.

It’s worth noting right now that whatever policy you decide to support should be consistently applied and enforced across the company. Every employee, from entry-level to leadership, has to operate under the same rules, or the company opens itself up to discrimination suits.

Think about the kinds of positions your employees hold and consider your own liability. This decision is extremely industry relevant. Someone in a dump truck can do a lot more damage than someone with a copy machine.  Also, federal regulations or state law may prohibit an employer from allowing the use of medical marijuana. Medical marijuana is legal in Ohio. Employees may very well come to you with a prescription to use medical marijuana, meaning that, so long as they don’t come to work inebriated, owning, consuming, or testing positive for use is not illegal for them. There are a few dozen qualifying conditions that allow doctors to make that recommendation. How you handle that, however, is still up to you.

According to Ohio Revised Code 3796.01, “Employers are not required to accommodate an employee’s use or possession of medical marijuana. Employers may enforce zero-tolerance drug policies and discipline, fire, or refuse to hire medical marijuana users.”

We’re not recommending anyone be fired or not hired due to legal marijuana usage. There aren’t any studies on the productivity or potential liability of legal marijuana users compared to non-users. But that doesn’t mean you can’t protect yourself;

When such a prescription is being considered, provide the doctor with a detailed job description for the employee’s position. This allows them to make an informed recommendation.

Ryan advises that; “If an individual employee comes to you with a (marijuana) prescription- remove that employee from safety-sensitive positions. Those who would be operating heavy machinery, dangerous chemicals and so on.”

If you choose to terminate an employee for Medical Marijuana usage, it must be made clear that the usage, not the condition which predicated the usage, was the cause for the termination, which violates the Americans with Disabilities Act. Make your explanation clear, and again, apply all policies consistently.

As you can see, the issue with marijuana right now is how muddied the waters are. There different sets of rules. Administrations are constantly going back and forth and it’s a huge cultural battleground. So, the best advice we can give you is to stay informed on Cannabis legislation and to partner with experienced professionals when issues present themselves.