Sexual Harassment in the Workplace: Know The Numbers 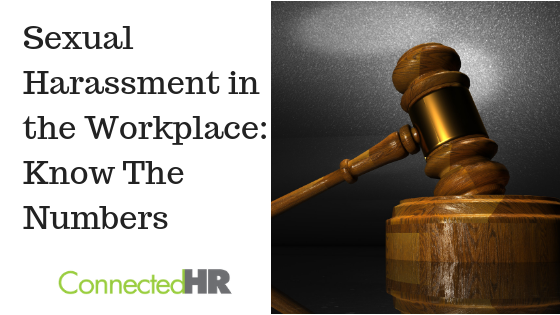 Given the current political and social discourse, we feel it would be prudent to take a look at the prevalence of Sexual Harassment and Assault in this country. We want to emphasize how important it is for companies to have and enforce their Harassment policies, in order to protect their employees and themselves. These are the worst kinds of claims. The stakes are extremely high, and, if the claimant is proven right, it often means that a crime has been committed. As a professional HR services firm, we would encourage any business owner to know how to handle such a claim before it happens.

The climate is shifting. The debate is nationwide. This discussion is happening in every workplace, cookout and internet forum across the country. So, it’s a good time to supplement any debate with hard facts and numbers.

According to the EEOC Office of Field Programs, 45% of harassment claims are on the basis of sex, making it the most common charge, followed by the race at 34%.

The Department of Defense estimates that there were nearly 20,000 instances of sexual assault within the armed forces in 2016, with both 2017 and 2018 looking to top that.

In 2015, the National Sexual Violence Resource Center estimated that 61% of sexual assaults go unreported. However, that number could be way down. Harassment filings are becoming far more common and sexual harassment charges are up 12% in the past year.

While we can’t say for certain, both you and I are assuming this is due to the rise of the #MeToo movement and the wave of high profile sexual assault scandals we’ve seen in 2017 and 2018.

Furthermore, it’s important to understand that no institution is saying the rate of sexual assault is rising. Many actually contend that it is decreasing and has been for decades. People, both women, and men (men report assault even less than women) are more likely to report now. Victims are heard and supported.

What all this means is that if sexual harassment occurs, it is far more likely to be reported. Which is great, so long as you’re not the offender and you follow the law in regards to managing the claim.

It’s important that claims of sexual harassment are taken seriously, if not simply out of an employer’s own self-preservation instinct, and that every company is equipped to handle harassment claims of any kind. Not to be impersonal or cold about it, (obviously, the real victim is always the victim) but these claims can be expensive for companies if not handled properly.

With controversial situations like this, you’ll often hear things like “I know it when I see it”. Ideally, yes, everyone would be capable of recognizing inappropriate behavior. But no, we’re not all able to, because it still happens. In an excellent piece by TIME, clinical social workers and counselors work with offenders, helping them understand that what they did was wrong. If something as serious as assault can slip under a person’s moral radar, a flippant comment, or brief contact absolutely can. If such actions go uncorrected, you’ll get people who don’t know it because they can’t see it.

If you or your employee has been harassed or assaulted, there are very specific steps you can take.

We’ll keep you up to date on the numbers; you keep us up to date on your needs. When something like this captures our national attention, it gives us an opportunity to update how we treat important issues. If you have any thoughts, please leave a comment below.