Workplace Sexual Harassment: What You Can Do 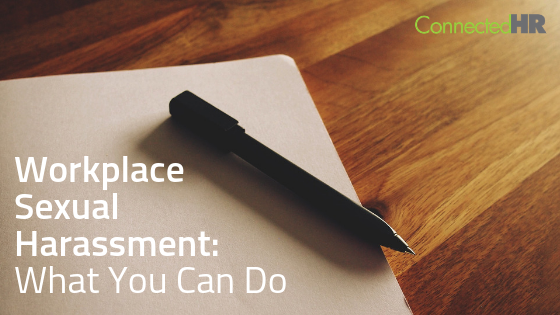 ConnectedHR has professionals working in offices across all industries. Sexual Harassment is one of the most difficult and unfortunate situations for employees to find themselves in.

It’s important for both employees and employers to learn to recognize and appropriately deal with acts of sexual harassment. What is Sexual Harassment?

First, we need to recognize sexual harassment. Recognizing it can be difficult, as situations, where two people may have been in a past relationship, superior-subordinate interactions, and others, can muddy the waters.

Sexual harassment is any conduct or behavior directing unwanted attention at a person’s sex or gender. It includes unwelcome sexual advances, requests for sexual favors, and other verbal or physical harassment of a sexual nature. Anyone can commit sexual harassment, and anyone can be a victim of it.

What that looks like, what that actually looks like in the real world, varies. Many cases of sexual harassment arise from misunderstandings or misinformation, but a person doesn’t need to know they’re doing it to be at fault. A joke between two friends may not make anyone uncomfortable, but the same joke may make another person uncomfortable. What’s acceptable between co-workers may not be acceptable between superiors and subordinates. Ultimately, it’s important to remember that sexual harassment is often determined by how the message is received, not intended.

What To Do If You’re Being Harassed

Let’s make something clear. This is not an article about the way the world should work, it’s a real-life redress of the best ways to protect yourself in the world we currently live in. It’s absolutely horrible that most advice regarding sexual misconduct and assault must be directed at the victims. However, most offenders neither see themselves as doing anything wrong nor fully understand the extent of their actions. Many don’t care. So, they’re unlikely to seek out resources like this, and, even if they did, if being able to just tell people “harassment is bad” was all it took, this article would be unnecessary.

More than anything else, its vital to make a record of the behavior, event, or encounter. Once you recognize what’s happening, write it down, save the email, whatever you need to do. This makes any account you give more credible and, in cases where harassment happens over several instances, establishes a record of misconduct. Note the date and time and everyone involved. Keep these notes safe.

One legal requirement for sexual harassment is that the conduct is “unwelcome.” So, whenever something happens, make it clear that the behavior is unwelcome. Say “no”. Tell the offending person you’re uncomfortable. Say “stop”. This demonstrates that the conduct is against your consent. Without expressing dissent, consequences can be downgraded to a slap on the wrist and may not curtail the behavior.

Your HR department wants to hear about anything untoward that happens between employees, trust me. Other than a terrible personal experience, sexual harassment is also a nightmare for companies to deal with. Not dealing with it opens them up to liability in a big way. Not just in the court of law, but the court of public opinion as well. For better and worse, the MeToo movement has given a much higher platform for people claiming to suffer from sexual harassment. No company wants the PR nightmare, so you can feel relatively safe in reporting to your HR department.

Worst case scenario, you report your mistreatment and it isn’t taken care of. The offender is either allowed to continue or the leadership refuses to see the problem. In that case, the EEOC has an excellent guide on what you should do and allows you to file a charge of employment discrimination. At this point, it may be a good idea to involve a lawyer of your own. Remember, retaliation for filing a claim like this is also illegal, so keep an eye out for any further harassment.

What To Do As An Employer When You Receive A Complaint

As an employer, creating a safe and productive environment for your employees is paramount. Creating a Sexual Harassment Policy as part of your Employee Handbook is a great first step. Once it’s implemented, you must consistently enforce it, having both a legal and ethical obligation to do so. Here are the steps every employer should take when handling harassment claims.

Be proactive and implement a Sexual Harassment Policy as part of your formal company material. Be sure it’s compliant with both state and federal laws. You may want to hire a law firm or an HR consultant to round out the policy.

Your employees must have a clear path by which they can report any misconduct. Make your HR department available, and allow opportunities for discretion on both sides. Someone should be able to meet with HR on the down-low, without being afraid of the whole company, or their harasser, knowing. HR should have a system by which to file and address complaints that are made.

When you receive a complaint, it must be taken seriously and evaluated thoroughly before any action is taken. Every story has two sides. The decision must be impartial. Any action taken needs to be legal. You HR Team or legal attorney should be well-trained in these areas and able to offer insight on the path forward.

Harassment, or the perception of harassment, cannot be allowed to stand for any meaningful amount of time. There are big and small solutions. You may simply need to send out a memo reminding people of your Sexual Harassment Policy. You may need to organize special training. You may need to terminate an employment contract. Don’t let this behavior become commonplace.

Any retaliation, including hours given or assigned tasks or inclusion in company activities, is illegal. The person making the complaint is not the enemy, and hopefully, neither are you. The situation is the enemy and it isn’t truly resolved until all parties involved are able to move forward and get back to work. Ask yourself if the situation that unfolded could happen again. Change things until the answer is “No”.

If you have any questions or are dealing with any harassment claims, give us a shout. ConnectedHR has a very highly trained team of consultants invested in protecting both the company and employees and creating a safe environment so everybody can get back to work.